A quick survey of what early life did to Earth

A quick survey of what early life did to Earth

It is quite a backdrop to describe the earth and humanity on the cusp of an epic flood.  The idea is real enough for me, but the notion doesn’t leave much opening as to where to go next.

In fact my thought to begin here was the understanding that we are in the midst of a powerful moment in this planet’s biosphere.  Maybe reaching back as far as we can, we may uncover perspective, or even understanding that life has a symbiotic relationship to its environment, both impact and change one another, in a continual manner.

Earth has spent at least 3.5 or possibly up to 4.1 billion years of 4.54 as a planet developing and re-configuring life.  That 75 – 90% of the time since Earth was a dusty, plasma ball of magma being pummelled relentless by other fragments

We are well aware that there is a serious scientific search for another instance of abiogenesis, to prove that there is natural process of life arising from non-living matter.  As phenomenal as such a discovery may be, life itself must be recognized as a force radically altering its environment, in as much as life adjusts itself to opportunities and difficulties it faces.

cyanobacteria – alone in the pool

One of the great biological moments was the evolution of cyanobacteria, a biological phylum of blue-green bacteria that produce energy from photosynthesis, which is thought to have happened early in the development of life, some 3.5 billion years ago.

Before photosynthesis, there was virtually no oxygen in the Earth’s atmosphere.  For most of two billion years, no oxygen produced by cyanobacteria was left unfixed, or found in the atmosphere.

The first billion was rapidly removed from the atmosphere by weathering of reducing minerals, most notably iron which gave Australia and other places their distinctive reds.

The next 1/2 billion years saw oxygen absorbed into the oceans, and then oxygen was absorbed by land surfaces for another 200 million years, still not significantly changing the oxygen levels in the atmosphere.

It was almost 2 billion years after the earliest life forms that atmospheric oxygen levels started to increase.  Its impact was far reaching.

cooling off with oxygen

The primoridal world’s high atmospheric methane  was the byproduct of volcanic activity and early microbial life. As a greenhouse gas, methane trapped the sun’s atmospheric energy and kept the Earth warm.

To the Earth’s atmosphere of that time, oxygen was a pollution by-product of photosynthesis that oxidized atmospheric methane (a strong greenhouse gas) to carbon dioxide (a weaker one) and water.

The changeover from methane to oxygen-rich atmosphere triggering the Huronian glaciation, 2.4 to 2.1 billion years ago, the longest ice age ever, lasting 300–400 million years.

life to the shadows and underground

As its levels increased, oxygen brought about what is known as the Great Oxygenation Event (GOE) and with it, a severe extinction event for obligate anaerobe, bacterial organisms killed by oxygen.  Up to then, most organisms had been anaerobic so their existence was significantly altered.

Still, life adapts.  Such microbial lifeform has been driven into hiding, away from from oxygen exposure.  In 2015 researchers from Yale University reported evidence of bacteria living as deep as 12 miles (19km) underground.  It attests to life ‘penetration’, durability, and diversity.

Then there are species such as the nematode worm, an extremely hardy form of life, able to go into what’s called dauer stasis, and withstand nearly any condition for any duration.  They’ve been found thriving 1.5 km underground, and survived the 2003 explosion of the space shuttle Colombia, suggesting them as a candidate lifeform that could withstand transfer between planetary bodies on meteors blasted by older astroid strikes. 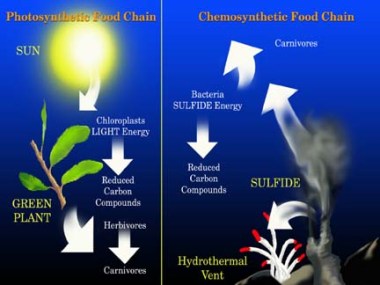 Following these biological progressions and human scientific study gives a much more diversified understanding of the capabilities of life.  Its resilience is exceptional.

some ice in your soup?

Although oxygen gave them an advantage, aerobic lifeforms still had the challenge of surviving a snowball Earth.  Many aerobic species were probably also lost at the onset of the first and longest known ice age.  Yet for the Earth and its surviving lifeforms, this era brought positive changes as well.

Water was deposited on the flat planes and the highest mountains and collected into ice sheets.  Seasonal melting, and harsh winter cycles continued to pull water from the oceans.  Sea levels drop dramatically.  These slow-moving glaciers and their runoff streams scoured the land on which they sat, heavy with the weight of thousands of metres of ice.  Ocean floors, exposed to the oxygen rich atmosphere gave further geological formation opportunities.

Surface life was still primarily a marine phenomena.  The liquid water that remained during this glacial period was also significantly colder overall. Cold waters holds more nutrients than warm waters, and phytoplankton tend to flourish where waters are cooler. In turn plentiful food promotes the diversification of zooplankton, a range of organism that feed on the phytoplankton.

hunger as a definition of life

Such diversity in Earth’s life marks a profound respect for its ability to adapt.  It seems that life naturally seeks out ways to harness energy.   Life has at its core fire, a burning need to seek, consume and release all available energy stores.

Biology might just be the animation and vessel of fire. Another viewpoint is to see our bodies are colonies of symbiotic bacteria.  We are just one product of our evolution and many traits comes with the lineage. Today’s human obsession to consume and spread is a built in trigger. We’re just better at it.

Oxygen did more than drive some life to the shadows and underground. It is estimated that the Great Oxygenation Event and its aftermath were responsible for more than 2,500 new minerals of less than 5000 minerals found on Earth.

The increased oxygen concentrations provided  huge tremendous changes in the nature of chemical interactions between rocks, sand, clay, and other geological substrates and the Earth’s air, oceans, and other surface waters.

Despite the advantages of natural recycled organic matter enabled in the nitrogen cycle, life had remained energetically limited until the widespread availability of oxygen. This breakthrough in metabolic evolution greatly increased the free energy supply to living organisms, having a truly global environmental impact; mitochondria evolved after the GOE.

So there was a certain game-changing that happened with the wide-scale establishment of photosynthesis and atmospheric oxygen levels to 20%.  A poisoning of early Earth’s methane atmosphere with oxygen opened the door to a new, more complex biosphere.

With more energy available from oxygen, organisms had the means for new, more complex morphology. This in turn helped drive evolution through interaction between organisms.

There has been a significant investment towards preparing the Earth for the second known, planet-changing, super-species that humans have become.

Life has already made untold changes made to the Earth and its biosphere over billions of years and species.  Not since life first began on the planet, has such a significant biological power been introduced into the recipe.

Add to the older formula, humans’ ability to make planet-wide changes in centuries, instead of over billions of years.

Intelligence may be a natural by-product of life and a brain to control biological function in animals.  It is to be seen if the higher function brain is as successful an evolutionary development as sight sensory, circulatory systems or photosynthesis.  Combined with fine motor skills in humans, intelligence has unleashed extreme biological potential, an unmitigated success for life.  Finally there is a species that can build the ark, and further the primary imperative, to take our life beyond this biosphere.

It’s pretty likely that a sentient species will prevail atop this or any biospheric chain.  We must do our part to ensure that species is ours.  We are either within centuries of extinction, or turning the corner on the next millions & billions of years.

If we fail, we can be certain, life will simply start from where we leave off.

One thought on “Before floods, there were puddles”

Notes from behind the levee ii