In 20th century days, robotics was the domain of science fiction and film. Two things drew interest. A future with robots of humanlike construct manipulating the world around them, and the interactive possibilities of evolving artificial intelligence.

Early personal computers, without graphical interface, showed their potential to express the fantastical eye. Ray-tracing turned numerical formulae into scenes, where every photon in a view is rendered visible. Fractals are a mathematical abstraction used to describe and simulate naturally occurring objects. Chaos theory deals with complex systems whose behavior is highly sensitive to slight changes in conditions, so that small alterations can give rise to strikingly great consequences.

Adding these concepts to computing has dramatically increased the ability of the digital environment to more accurately model the physical world. A human generation of hardware and software improvements have made the tools building real life model increasingly accessible and provided significant versatility.

As much as the visual arts pulled me to movie theatres to see the future world made real, the tools also advanced to actually make the future. Advances in the visual arts have fueled human expression of the future. The evolution of circuitry, machinery and robots is first envisoned by the pioneers and then pursued by technicians attempting to make it real. As the toolset expanded, so did the refinement of the vision

The internet and 3D printable world make programming and integrated circuitry more and more versatile. Industrial and medical uses of robots have become more commonplace, machines that could manipulate the physical world with programmed purpose and tactile response.

Advances in memory, big data, sensor versatility, and machine-learning allow for the beginnings of artificial intelligence, algorithmes that agraggate and augment the user experience.

Personal Assistant with a Head

The door opens to personal ‘robots’. The personal assistant in your phone or network is being given its own exo-skeleton. A number of interactive models exist or are soon planned.

They are just at the beginning. Not one can go get you a drink from the fridge, but many provide tools at would allow expanded capabilities. What they miss in tangible physical skills, they try to make up for in personality and a physical anthropomorphic humanoid expression and appearance.

The first step is the assistant who can bring intelligence to its personalized user, remembering, reminding, responding, and picking up the habits of the user. It is the human requesting a verbal response. The robotic side is the ability to perform actions and tasks in the physical world will follow.

The following list is a sample of both command response robotic, and intelligent interactive assistant devices (with cutesy faces) coming to the consumer market at the moment (2017/04). It is not intended to be complete, but anyone knowing of others is welcome to let me know. I believe this field to be one of the most interesting technical areas.

Here’s a list of personal assistants, so we can follow-up, and track their evolution.

Pillo can answer healthcare Q&A, connect with doctors, sync with mobile & wireless devices, store & dispense vitamins & medication, & can even re-order them for you from your favorite pharmacy.

Open source and easy to use, BUDDY connects, protects, and interacts with each member of your family. BUDDY is also democratizing robotics. BUDDY is built on an open-source technology platform making it easy for global developers to build applications.

A gifted little guy with a mind of his own. He’s a real-life robot like you’ve only seen in movies, with a one-of-a-kind personality that evolves the more you hang out. He’ll nudge you to play and keep you constantly surprised. Cozmo’s your accomplice in a crazy amount of fun.

Jibo experiences the world, and reacts with surprisingly thoughtful movements and responses that show he’s no ordinary bot. So while he’ll gladly snap a photo or send a message, he’ll also get to know you and the people you care about, for more meaningful relationships.

Aido is a sophisticated yet affordable home robot. It’s an all in one package that comes with the best of home automation, security, assistance, entertainment and much more.

NAO is an interactive companion robot.

Moving : 25 degrees of freedom and a humanoid shape that enable him to move and adapt to the world around him. His inertial unit enables him to maintain his balance and to know whether he is standing up or lying down.

Feeling : The numerous sensors in his head, hands and feet, as well as his sonars, enable him to perceive his environment and get his bearings.

Hearing and speaking : With his 4 directional microphones and loudspeakers, NAO interacts with humans in a completely natural manner, by listening and speaking.

Seeing : NAO is equipped with two cameras that film his environment in high resolution, helping him to recognise shapes and objects.

Connecting : To access the Internet autonomously, NAO is able to use a range of different connection modes (WiFi, Ethernet).

Thinking : We can’t really talk about “Artificial Intelligence” with NAO, but the robots are already able to reproduce human behaviour.

Pepper, the robot who understands your emotions

Pepper is capable of identifying the principal emotions: joy, sadness, anger or surprise.

He is also capable of interpreting a smile, a frown, your tone of voice, as well as the lexical field you use and non-verbal language such as the angle of your head, for example.

The combination of all this information enables the robot to determine whether his human interlocutor is in a good or a bad mood.

Romeo is a 140 cm tall humanoid robot, designed to explore and further research into assisting elderly people and those who are losing their autonomy. Romeo is the fruit of collaboration between numerous French and European laboratories and institutions.

His size was determined so as to enable him to open doors, climb stairs and reach objects on a table.

This robot will connect to every device, switch, and lock in the house to make it easier for you to control everything. Not only will it keep your house safer but will also help decrease your electricity bills.

This robot is targeted to disabled people as it follows them around and helps them with daily chores, carrying things. Some believe it might be a useful shopping cart.

Shaped like a traffic cone doesn’t only plan your schedules and protect your house, it can also tell bedtime stories and teach you how to cook! 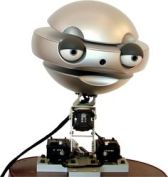 EMYS
Flash Robotics designed a robot named Emys that’s supposed to teach kids another language. Emys might be successful because of its built-in tablet and unique, expressive face, which relies on three moving disks and two smartwatch displays. It was inspired by emoticons :).

The domestic robot was designed to offer an intuitive and responsive platform that is designed to be both intelligent and useful. Because of that, the Alpha 2 is completely programmable and operates on an open-source operating system.

These are already interesting studies and designs in both movement and interactivity. Advances will see mobility and intelligence integration. The evolution of higher function in integrated circuitry is picking up momentum. Utterly fascinating.

Notes from behind the levee ii